Charles Darwin, the father of ‘Evolutionary Theory’ suggested that humans have thrived on this Earth because their digits, mental capacity and upright statures have allowed them navigate the environment and figure out how to live.  His mantra, “Survival of the Fittest” is used in psychology and sociology as the basis for continued  research on human development and extinction of species.

Well, now that all sounds great and ‘scholarly’, but for real, we just have to do what we gotta do to survive in this crazy thing called life.  Mobb Deep said, “we livin’ this ’til the day that we die; survival of the fit, only the strong survive!” (Mobb Deep, “Survival of the Fittest” Song) Strength, which fuels determination, has helped us survive.  Those survival instincts that kick in when we are faced with danger include adrenaline so high that we are shocked by the strength we truly possess.

As we celebrate the 50th anniversary of the March on Washington, we are reminded of the strength of people who fought for their civil rights.  The determination of African-Americans and people of other cultures and ethnicities who support the fight and wanted their voices heard.  The strength of a man, who died at the age of a VERY young 39 years old, that provided a voice for millions!!  But we can’t help to think even further back to the determination of a woman, tired from a hard days work, who refused to move to the rear of the bus. 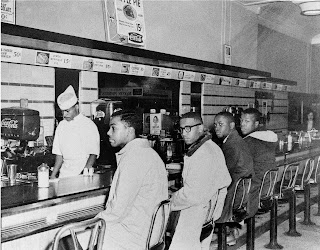 We have to continue to think about the strength of those teens in NC who sat right at the Woolworth’s counter because it was their right.  The African-Americans who gladly took their 40 acres and their mule to create a life for their newly freed families.  The selfless woman who made tracks on a very long path, many times, to free others!  And, need I say it, the man who shed his blood and gave his life, setting an example of what “Survival of the Fittest” truly means, helping his followers understand eternal life and love.

It is amazing how strong and determined we are when faced with situations of adversity!! So does this explain why some people aren’t as determined in the midst of their own dreams?  We talk about it, but you have to BE about it!!  You don’t have to rush toward your goals!  All of these pioneers had visions and strategically thought through how it should be implemented.  You have the power to do the same and it doesn’t have to be in the midst of turmoil, chaos, adversity, or challenge!

Confidence builds strength!  Strength fuels determination!!  Determination is standing firm in your purpose!!!  Go for what you desire!!  Even trying takes effort!!  So, be DETERMINED!!